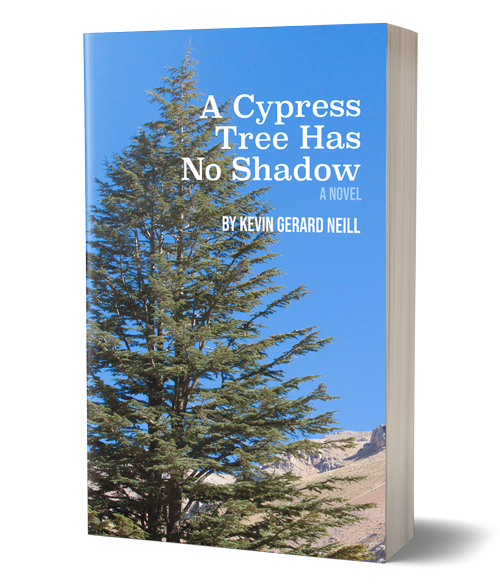 A Cypress Tree Has No Shadow

A Cypress Tree Has No Shadow is a story of Palestinian refugees. It is seen through the eyes of a young Englishwoman, Justina Kent, who has left her home to accept a medical position in a United Nations refugee camp: Allenby Barracks. As readers of today’s news are barraged with tragic tales of refugees in their tens of thousands struggling to survive, A Cypress Tree Has No Shadow brings the intimate world of refugees to life and also sheds light on the foreign aid workers who travel to lands not their own to serve humanitarian causes they may not fully comprehend.

A Cypress Tree Has No Shadow is about women – those who operate the camp medical clinic and the Palestinians who are their friends and patients. Living in a universe largely dictated by men, the women of Allenby Barracks must confront daily a host of sexual and cultural prejudices that make life all the harder. In this quest to thrive in Allenby, they now must confront another nightmare: a wave of human organ trafficking discovered in and around the refugee camp, a crime made worse because its victims are children.

This is not just a story of tragedy, though; A Cypress Tree Has No Shadow is also full of the joys found in friendship and love, as well as the strength discovered in hope.

What People Are Saying

You illustrated the Middle Eastern culture like a native. (A Cypress Tree Has No Shadow) showed how complicated the region and the conflict are—the mistrust towards foreigners, women issues, human rights issues…Sometimes, you can’t save the people you love & life can be cruel.
Dina Mousa
Egyptian immigrant, novelist, screenwriter
A fantastically layered novel with genuine human connections at the heart of it. The diverse characters are rich, hypocritical, flawed, and well-rounded—as in life. The bonds they develop make for enthralling reading alongside a swooping plot…
J. Waller
Creative Writer/Copywriter, Bristol, UK
Read a Passage

In a still, dark room smelling of disinfectant that stung his nose, the dazed, terrified boy lay silently crying. He was on his back atop a thin mattress, in a bed or trolley, his wrists and ankles secured with straps so tight he could barely move. His mouth was taped shut. He knew nothing about where he was or how he had gotten here. The last thing he recalled, the last normal thing, was going to the market with his father to buy grapes. After that, father and son had walked to an apartment not far from the market to visit a man the boy did not know. They had had tea and sweet biscuits, a treat for the child, who did not see his father often. He had felt sleepy after drinking his tea. And then the boy had awakened here, alone.

The shaft of blue light streaming through a large, barred window near the ceiling made the boy sense it was nighttime. He heard traffic sounds. Trickling through his fear was the question of where his father was. He strained his neck to look for the man, but all he could see was a tall, whitish cabinet with glass sides against one wall, an empty stool, and an upright tank or cylinder that looked like something a scuba diver would strap onto his back. The boy also saw a flat tray or table near his head covered with a cloth.

A sudden scratching noise made him panic anew. He pulled against the straps binding him until his wrists and ankles burned, but his limbs barely budged. When the scratching grew louder, he twisted his head around to find the source. He finally saw it atop the cabinet: a large, dark rat. The rodent was on its haunches, peering down at him. The boy tried to scream through his taped mouth, but all that came out was a squealing muffled moan.

The slam of a nearby door caused the rat to leap from the cabinet and sail beyond the boy’s sight. Afraid the rat might come near him, the boy struggled to rise and see where it went, but his bindings held him down. Just then, the door to the room swung open and the boy froze. From where he lay, he saw the silhouette of someone in a long dress appear in the doorway. At the same moment, a fluorescent light exploded in the ceiling overhead that blinded the boy with its brightness. With another moan, he shut his eyes again and turned away.

The boy quieted, whether from fear or hope, he did not know. Like trying to confront a nightmare, he forced open his eyes and looked toward the doorway. Standing there was a woman, or at least that is what he gleaned from the large, round eyes and smooth forehead he saw beneath the light, for the rest of the face – from nose to throat – was concealed by a gauzy mask. And what the boy thought at first was a dress now appeared to be a light blue gown.

The boy fixed his eyes on the woman, pleading for answers with his expression.

“Shh,” the woman repeated. She moved as if gliding until she was alongside the boy, halting next to the cloth-covered tray. Her own eyes, when she looked down at him, appeared wholly indifferent to his suffering.

The boy stared, breathing hard through his nose, and watched with widened eyes as the woman pulled the cloth off the tray and picked up a slim hypodermic syringe with a gloved hand. Again, the boy squirmed against his restraints. Almost at once he felt a needle puncture his arm, and then came blackness.